Special Offers
There are no special offers at this time.

Wheel Of The Year (Witches Holidays)

The shortest day and the longest night. Many Christian traditions were stolen from the Old Ways, including decorating an evergreen tree with symbols of life to remind the tree of its summer bounty. Yule marks the birth of the Sun King as from this point forward the days will be getting longer and longer. Other traditions include the war of the Holy and Oak Kings, kissing under the mistletoe, burning the Yule log, and caroling or wassailing.

The unburned portion of the Yule log should be kept somewhere in your home as a powerful amulet of protection.

Kissing under the Mistletoe is a tradition that has flowed down to us from the Druids, there is no doubt that it changed radically as it passed through the Christian era. Mistletoe was sacred to the Ancient Druids, who gathered it from high branches of the sacred oak trees with their golden sickles.

The banishing of winter, this is the celebration of the transformation of the Goddess from Crone to maiden. The Goddess statue is ritually bathed and veiled in white. Often associated with the fire Goddess Brigid, implements of light such as candles and lamps are blessed. As a test of faith, the ancients extinguished the hearth fire, and then traveled to ritual, and returned with an ember from the bale fire with which the hearth fire was relit.

This holy day is dedicated to the fertility Goddess Eostre whose symbols are the hare and the colored egg. One of the foods traditionally used to honor the Goddess Eostre was a round cake or cookie with a symbol of the equal armed solar cross. The Goddess blankets the Earth with fertility as the God stretches and grows to maturity. The hours of day and night are equal and light is overtaking darkness. This is a time of beginnings, action, planting spells, and of tending the gardens. This is the start in the pagan year of spring, at least among Wiccans and Celtics. The first flowers are praised and the God and Goddess thanked for the true return to happier times for all. Ostara is one of the more colorful holidays, not one of the somber colors found in Yule and Candlemas. Feasting and socializing are the important factors in this holiday as well as the celebration of the return of color to the natural world. In the Christian calendar, again to draw early worshipers, they marked this as the final days and rebirth of Jesus (when according to history he died in June!) 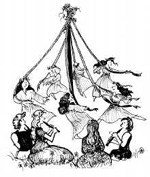 The wheel has journeyed half way' round to one of the biggest festivals celebrated by Witch's. At Beltane, the Sword of Power returns back to the care of the Goddess symbolizing the beginning of Her reign of the Wheel. The Earth is once again bursting with life. Anciently, the entire month of May was dedicated to the union of the Goddess and God, and it was considered very unlucky to marry during the month of May, thus there came to be a flourish of weddings in the month of June!

The Beltane fire is jumped for fertility, and a maypole is decorated with a wreath of flowers and ribbons of green and white is danced by celebrants dressed in white and green. The men dance in one direction, and the women in the other, and the intertwined ribbons are then divined to foresee the coming year.

Modern day Witch's clean and prepare their personal space about a week before the rituals begin, this is where the idea of Spring cleaning was born! On the day of celebration, we blanket the ritual space with flowers, wreaths, garlands, bouquets, May baskets for the celebrants, petals and flowers galore!

The longest day, and the shortest night, this was the time when the Faerie court traveled. Fools caught on the cross roads were rumored to have been captured by the faeries. The legend of the Green man or the Green Knight, whose smiling face was surround by leaves can be seen carved on Medieval buildings, is remembered. This night marks the height of the Sun's power. The fertility of the Earth is celebrated to its fullest as from this point on, winter will be coming quickly.

This celebration was anciently the first grain harvest of the season, and with a stroke of the scythe, the corn God is voluntarily, and symbolically sacrificed so that the children of the Goddess may be feed. The God then moves to the Summerland as the Guardian of the dead to warm, and to welcome the souls who reside there prior to resurrection, and rebirth. Modern day Witch's focus on the personal sacrifices that we must make to nurture our dreams, and desires to fruition!

Traditionally the fruit and nut harvest, and the best of the harvest is stored for seed in preparation for the coming year's planting and once again the day and night are of the same length. The people ready themselves for the approaching winter and tools are cleaned and repaired.

The Celtic New Year. The time when the Sword of Power is exchanged from the Goddess to the God symbolizing the beginning of his reign. The land is no longer lush and fertile; winter is fast approaching. A dumb or silent super the last repast for those who have died this year, is shared as we bid a final farewell for this lifetime. Traditionally, it was considered inappropriate to mourn after Samhain. Any crops still standing in the field after Samhain were considered the property of the faeries, and it was very unlucky to harvest after this day.

Special Offers
There are no special offers at this time.
What's New?